Yahweh’s stern words in today’s first reading (1 Sm 8:4-7, 10-22a) must have shook Samuel to the core.  Samuel, the last of the judges (who were generally a motley lot themselves) with children that went astray, may have found it at least somewhat understandable that the elders had had enough of them all and wanted a different type of ruler.  Unfortunately, their true Ruler (and ours), the only one we can completely trust, did not reign in their hearts.  Despite Samuel’s warnings of what these kings would do to the people, and that they would not be able to fall back on the Lord in their distress, they demanded an earthly king.  What was their stated cause?  “To rule us and to lead us in warfare and fight our battles” (v. 20).  They wanted to be like every other nation, chasing earthly gain and power.  But they did not remember that as the Chosen People they were set apart to be a beacon for all peoples.  Now, rather, they would be subject to the vagaries endured by every other earthly kingdom and their pleas to God would go unheard (at least until they learned their lesson, again and again). 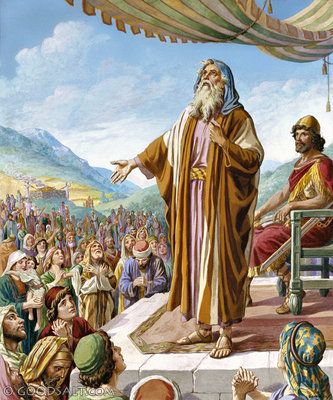 More and more individuals and nations today are rejecting their true King.  Looking to politicians and celebrities (often one and the same) for often very fallible guidance, they wonder why the world is such a mess.  “Where is God in all this?”, they say.  Like with the ancient Israelites, God does not impose Himself on us.  We have the power to reject Him and put our confidence in ourselves.  And when it all goes awry?  “When this takes place, you will complain against the king whom you have chosen, but on that day the LORD will not answer you” (v. 18).

Replacing the Lord of every aspect of our lives and our world with fleeting pleasures (even in just one aspect) and with fallible humans has consequences.  Pray for the conversion of hearts to the one true God.