The Gospel for “Spy Wednesday” (Mt 26:14-25) contains a quote (above) from the “spy,” Judas Iscariot, at the Last Supper. Matthew is the only evangelist to relate what Judas said to Jesus in response to Jesus’ speaking of His betrayer, although all four Gospels tell us some form of this episode.  Possibly Judas whispered his words or others did not hear it because of the general discussion/commotion coming from Jesus’ declaration of a betrayer at hand (see Jn 13:28), but it was a bold statement in any case.  We learned a few verses earlier that Judas had already cut a deal with the Pharisees so he knew he was the betrayer.  Was he trying to test Jesus’ to determine if He knew or discerned his intent?  Was he trying to mask his own true intentions to Christ and the others at table (although only John apparently knew at the time [see Jn 13:25-26])?  Might the question betray an internal conflict on the whole matter?  We don’t know.  But we do know that, even though Judas is not mentioned again in Matthew (or Mark or Luke) until he appears in the Garden of Gethsemane to go through with the plot (Mt 26:47-56), he does leave the Passover meal early to put his plan in motion (see Jn 13:20). 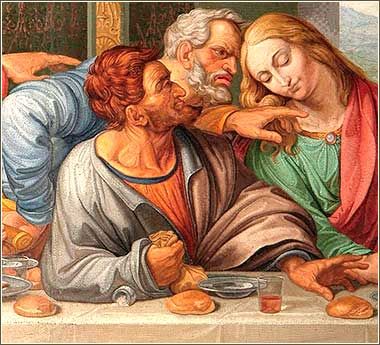 Although the thirty pieces of silver was ostensibly the reason for Judas’ betrayal of his Master, there certainly must have been discontent brewing for some time.  Likely he was disappointed in Jesus.  Somehow He did not meet his expectations.  Instead of walking out after the Bread of Life discourse when Jesus made a point of calling him out (seemingly out of the blue — see Jn 6:70-71), or at some other point, he decided, apparently, to continue to use Jesus’ ministry to line his own pockets (Jn 12:6).  Maybe he enjoyed the fame as well.  But were things getting a little too hot for his comfort?  Did he think Jesus was going down soon and he didn’t want to be caught in his net?

We must be diligent to not emulate Judas.  Jesus tells the apostles in today’s reading, “woe to that man by whom the Son of Man is betrayed; it would be better for that man if he had never been born” (v. 24).  Meaning, that to be born only to end up eternally damned, it would have been better not to have come into existence in the first place.  Let those words of Jesus never apply to us.  To stick with Jesus only when it is advantageous to us but give Him up when we grow disappointed, disenchanted, or afraid makes us no friend of Christ.  Faith, in order to be strengthened, must be tested.  Judas ultimately failed the test.  Unlike Peter, whose offense against Jesus was also grievous (and much more public), but whose remorse led to hope and forgiveness, Judas despaired of God’s mercy and died in his sins.  So, even if we have betrayed Jesus, as long as we have breath, we can return into His good graces as long as we sincerely repent.

Finally, note that Judas may have received the First Communion unworthily (see Jn 13:27, 30; Augustine and Aquinas believe He ate the consecrated bread, although others debate that assertion as they attempt to reconcile all four Gospel accounts).  If he ate, considering the mortal sin he was committing, he was condemning himself: “Therefore whoever eats the bread or drinks the cup of the Lord unworthily will have to answer for the body and blood of the Lord” (1 Cor 11:27).  We are wise to remember well this grave admonition from Paul before presenting ourselves at the altar rail.  Just like Judas, we have access to Jesus (in our case through His ministerial priest who acts in the person of Christ) in Confession so that grave sin can be expunged.  Let us not be like Judas who did not take advantage of the opportunity to repent before or after his dastardly deed.

May St. Peter and all the saintly apostles pray for us that we will fight the good fight and stay close to the Lord till the end.