I have long wondered about this line, uttered by the tenants, from the Parable of the Wicked Tenants (Mk 12:1-12).  How in the world, I have asked, could these folks, in their wildest imagination, have thought that murdering the son the landlord sent could possibly gain them the land that they worked?  Was there a practical explanation or was it something strictly spiritual that Jesus was trying to evoke in His hearers? 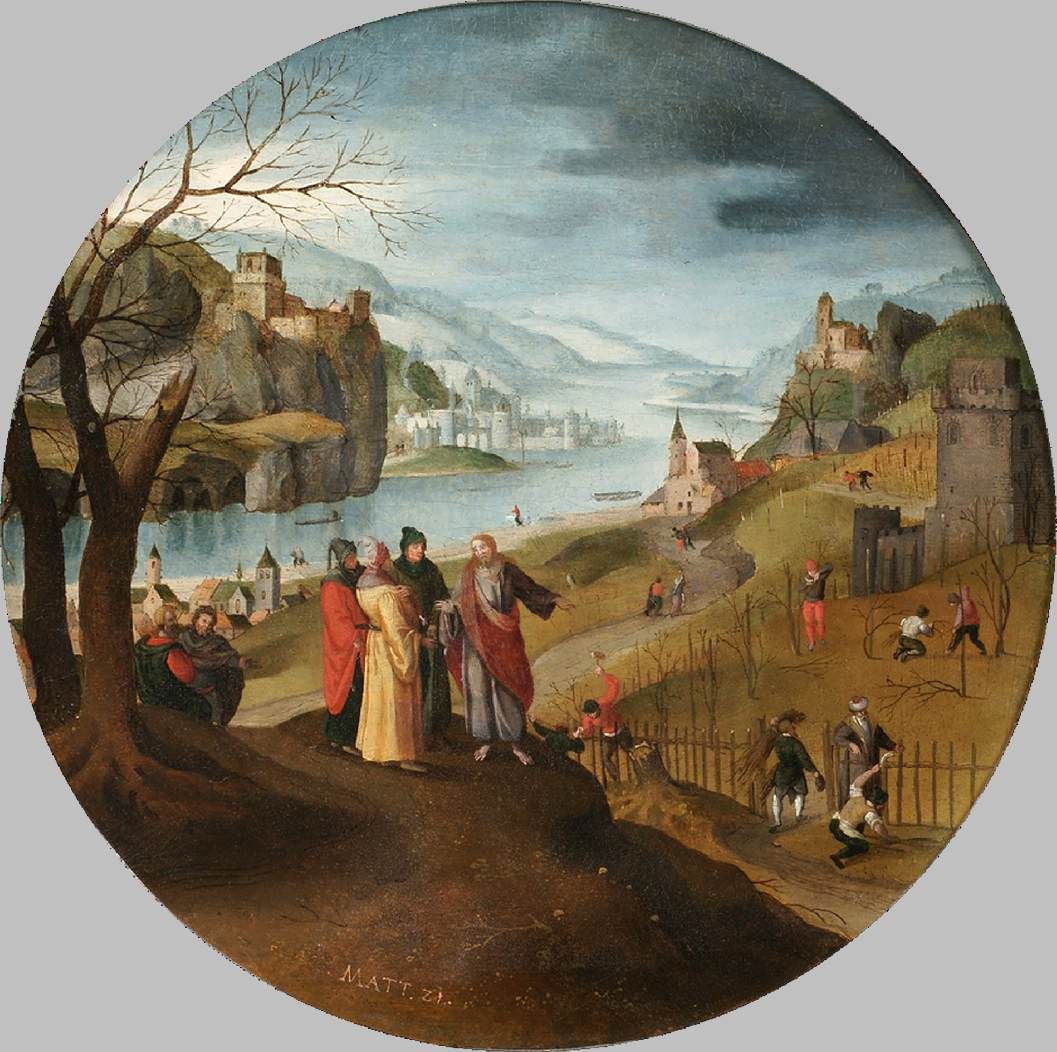 Abel Grimmer, The Parable of the Wicked Tenants, c. 1590’s

That the first part of this parable reflects on the history of the Chosen People is quite obvious.  Prophets have come to Israel throughout the Old Testament, always to be ultimately forsaken.  The Son of God now comes, already experiencing rejection by many religious leaders, and anticipates His ultimate demise.  That being the case, the tenants are types of the chief priests and scribes — these words are aimed squarely at them.  So how does this work?  What is the message?

Time to consult some books!  Fortunately, I have more commentaries dedicated to the Gospel of Mark than any other book in the Bible.  Now, many did not address this at all, others touched on it unsatisfactorily, but a few were helpful.

The key to clearing up the confusion is to be disabused of the assumption that the tenants knew that the landlord was alive (remember, he was abroad so who knows what his status is — v. 1).  If they believed that the son was the only heir then killing him would allow them to claim the land, as the law at the time allowed (contrary to some commentaries’ speculation that they would take the land due to contract, confusion, or hostile seizure):

The seizure of the property is illumined by the contemporary legal situation.  The arrival of the son allowed the tenant farmers to assume that the owner had died and that his sole heir had come to claim his inheritance.  Under specified circumstances an inheritance could be regarded as “ownerless property,” which could be lawfully claimed by anyone, the prior right of ownership belonging to the claimant who comes first.  This was the case when an inheritance was not claimed within a specified period of time.  The provision of law explains why the tenants assume that if they murder the son (and presumed heir), they may take unhindered possession of the vineyard.  It would become “ownerless property” which they can claim as the actual occupants of the land.  (William L. Lane, The Gospel of Mark, The New International Commentary on the New Testament [Grand Rapids: Eerdmans, 1974], 418-19)

How does this apply to the religious leaders to whom Jesus is directing this?  They “cherished the hope that in putting Jesus to death they would remain the masters in Israel” (M. J. LaGrange, The Gospel According to Saint Mark [London: Burns, Oates & Washbourne, 1930], 125) (consider John 11:50).  And how do they lord over the people?  “The Son is the heir.  If he dies, the inheritance, that is, the authority to form and to apply the law ourselves, will be ours.” (Adrienne von Speyr, Mark: Meditations for a Community, trans. Michelle K. Borras [San Francisco: Ignatius, 2012], 544) (Jesus calls this out in the entire chapter of Matthew 23).  But the scribes and Pharisees were even worse than the tenants in the parable — they knew God, the ultimate landlord, was alive!

The sin of pride, the crux of the Original Sin, reigned in Jesus’ time as it does today.  Let us never discard the Lord Jesus Christ from our lives or our society, thinking that we don’t need Him, that He gets in the way, or that we know better than God what is right and good.  The destructive results of this attitude are all around us.

Here I have focused on one line in this allegorical story.  But there is so much more to this particular aspect of the pericope as well as the entire passage (particularly its prophetic nature — not only of Jesus’ death but also of the fate of Jerusalem).  Find a good Catholic commentary and dive into this excerpt.  The richness of the symbolism and the terrifying message the Jewish religious leaders should have taken away from it is stunning.

2 thoughts on ““This is the heir. Come, let us kill him, and the inheritance will be ours.””